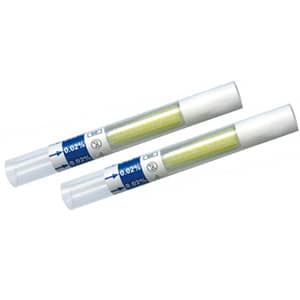 0.02%BreathScan is the only disposable breath alcohol detector that is FDA 510(k) approved which shows that it is superior to and easier-to-use than any other disposable alcohol tester.

One set of instructions are shipped per order.

Alcohol plays an important and integral part in almost every society in the world. While not all alcohol usage is problematic, alcohol remains the most abused drug in history. In the United States, alcohol plays a part in half the automobile fatalities and nearly half of all industrial accidents. For employers, alcohol abuse accounts for two thirds of all substance abuse complaints and depletes a similar percentage from the health care benefit budgets of American companies. While the responsible, adult use of alcohol has its appropriate place in our society, an increasing number of public safety officials, corporate officers and small business managers are concerned about problems with alcohol abuse in the workplace and in public places, particularly when the substance abuser is in control of a vehicle or heavy equipment. As a result, there is a demand for more effective detection of alcohol impairment, where possible, or of blood alcohol content (BAC) in individuals engaged in work or driving.

Traditional testing has centered on the testing of blood alcohol content rather than impairment, since impairment is significantly difficult to prove without highly specialized and specific evaluation of the subject. Generally, professionals in the testing field have found it advantageous and practical to test blood alcohol content and to rely on set levels of content in lieu of proof of impairment. Generally, .10% or .08% BAC levels have been used by legislators and jurists as the benchmark for the regulation of behaviors related to, or negatively affected by, alcohol. Unfortunately, these testing modalities (such as Breathalyzer) require highly specific and accurate instrumentation which is both expensive and immobile. As a result, alcohol testing has presented problems for testing professionals in both the public or private sectors. The high cost of sensitive equipment that cannot be transported has meant that most private sector needs for alcohol testing have gone unfilled until the introduction of disposable breath testing devices.

The BreathScan® Alcohol Detector is considered by many to be the best example of these devices. BreathScan® is a portable, disposable alcohol detector with an extremely low unit cost that makes it suitable for general use in the workplace or other remote locations. Various independent agencies have conducted validation studies that examined the BreathScan® instrument's accuracy and suitability as a preliminary screening device when used to determine probable cause for more extensive testing. The following is a survey of their findings.

The NHTSA looked at the use of BreathScan® specifically as an aid to police officers in making an objective evaluation in drunk driving cases. While not intended as an evidenciary test, the NHTSA found BreathScan® suitable as a first line of BAC quantification. The NHTSA determined that the BreathScan® alcohol detector was able to accurately distinguish between alcohol levels below and above .10% BAC (or .08% BAC for BreathScan® units calibrated at the lower BAC level). Several tests at different room temperatures were performed in accordance with established methodology. Since evaluation specifications for preliminary test devices do not exist, the NHTSA used the guidelines "Specifications for Evidential Breath Testers", specifically the precision and accuracy tests, the blank reading test, the breath sampling test, the ambient temperature test and mobile test from existing NHTSA guidelines. Using standard aqueous alcohol solutions contained in 34-degree thermostats, researchers duplicated breath alcohol concentrations in controlled conditions. This breath sampling test was designed to yield maximum sampling consistency and efficiency. The BreathScan® alcohol detector contains a crystalline preparation which is hermetically sealed in a glass ampoule. The subject breathes through the tube so as to deliver approximately two liters of breath over the crystals. At .00% BAC (no alcohol present) the crystals remain uniformly yellow. At .05% BAC, some of the crystals turn green. Above .10% BAC, virtually all the indicators showed all the crystals turned green. At precisely .10% most of them were fully changed and a small number were partially changed with only a few yellow crystals remaining. This indicates a borderline situation and should be treated as a caution to the operator. The DOT testing was conducted with indicators calibrated for full crystal change at .10% BAC. BreathScan® alcohol testers are also available calibrated for the .08% BAC level, a figure becoming more widely adopted in many states as the legal limit for the operation of a motor vehicle. No difference in test results was noted when samples were compared under incandescent and fluorescent lighting.

Fortune 500 company, W.R. Grace & Company conducted testing at their Davison Chemical Division and produced results that concurred with DOT findings. They found that small beds of the chemical agent in BreathScan® accurately distinguish between alcohol concentrations representing BAC levels of .00%, .05% and .10%. In their testing simulation, Grace used a Draeger Mark IIA Alcohol Breath Simulator. The simulator passes air through a constant temperature bubbler containing a predetermined concentration of alcohol and water. The alcohol laden air is then passed through the BreathScan® device for ten seconds, disconnected and allowed to sit for two minutes before evaluation. At .00% BAC, all the crystals retained their yellow coloration. As low as .02% BAC, some discoloration of crystals from yellow to blue-green occurred. At .06% BAC, substantial color change occurred to the entire sample, with yellow residue. At .08% BAC, there was less yellow remaining and at .10% BAC almost all the original yellow coloration had disappeared. Grace tested samples of the testing agent packed in both glass tubes and in BreathScan®'s patented glass ampoules with similar results except that the color change produced in the glass ampoules appeared to be slightly less intensive. They also noted a slight concentration of colored crystals near the intake end of the ampoule.

The Colorado Department of Health's Alcohol Test Program tested the BreathScan® device to determine it's suitability for use by law enforcement personnel in traffic stops. They noted that the unique packaging provided by the BreathScan® ampoule effectively prohibits the contamination of the crystals until the device is ready to be used. They also noted that the BreathScan® alcohol detector was suitable for screening only, and should be backed up by confirmation testing of bodily fluids. Colorado's testing is significant in that it was conducted on live subjects for the .00% BAC benchmark. A SmithWesson Mark IIA breath alcohol simulator was used to test alcohol concentrations. Testing was conducted at 34-degree centigrade, as in the previous two tests, and results were checked using gas chromatography. Testing was conducted at .85% BAC and .108% BAC. At both levels significant discoloration of the crystals occurred, enough to indicate that a subject's BAC was in the impaired range and they found BreathScan® to be suitable for use as screening device prior to further testing. In fact, the chief of the testing program noted that BreathScan® was one of the better products they had evaluated and was well suited for the market it is intended to serve.

Field studies of BreathScan® were conducted by the Denver, Co. Police Department. Officers used BreathScan® at traffic stops as a screening for drunk drivers and found a 98% accuracy correlation. Of 200 tests of truck drivers, only four BreathScan® tests were inconclusive. The Department considered this an excellent rate of accuracy for a portable testing device.

Of concern to medical professionals is the possibility that physiological conditions not related to alcohol use might affect the test, particularly when testing diabetics. Diabetics produce breath ketones, but when tested on the largest degree of ketonemia on severely ill patients when admitted to intensive care, at no time did the ketones discolor the BreathScan® crystals. The testing at the Davis Center rules out the chance of a false positive for acetone or ketones when checking for breath alcohol.

In a recent study, using a test protocol similar to the one developed by Dr. David Cowan of King's College, London, an independent laboratory measured the effectiveness and reproducibility of the indicator color change at claimed alcohol concentration levels. Their evaluation conclusion supported the claim that BreathScan® testers are capable of detecting breath alcohol concentrations of .02%, .04%, .08% and .10%. 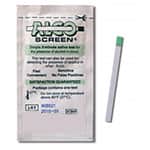 10% off All AlcoScreen Saliva-Based Alcohol Tests