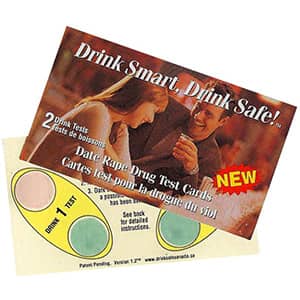 Drink Safe Technology is a color-chromatic chemical recognition system designed to provide a first line of defense against the clandestine placement of illegal drugs in a beverage. It is not designed to be a forensics evaluation of suspect drug material, nor should it be implied that a positive result alone is enough to begin criminal prosecution. In order for this technology to be of any practical use, it was imperative that certain criteria be met in the design. Besides the obvious need for specificity to the targeted drugs, relative cost of the end product is paramount if this technology is to be widely distributed and utilized. For this reason alone, immunoassay technology is cost prohibitive. Second, the test should be rapid, and easy to interpret. Finally, resistance to degradation over time is important relative to price. For all these reasons, a chemical recognition system was chosen versus an enzymatic system.

Drink Safe Technology was created to detect the two most prevalent agents utilized in drug facilitated sexual assault, gamma hydroxy-butyrate (GHB) and ketamine. After speaking with numerous law enforcement agencies throughout the United States, a typical `Date Rape' dosage was established. These parameters were used to design relative sensitivity. Drink Safe Technology can detect drugs at lesser amounts, but we feel these levels constitute a typical dosage.

Currently, there is not a flunitrazapam (Rohypnol) test included in our technology. It was determined that the incidence of drug facilitated sexual assault utilizing this drug agent has dropped to almost none. This seems to be because of the safe guards introduced by the manufacturer Hoffman-LaRoche. Their reformulation to include a blue dye and decreased water solubility seems to have been successful.

Independent testing of both GHB and ketamine in alcoholic and non-alcoholic beverages is to be performed at the concentrations set forth as follows:

All instructions printed on the Drink Safe Coaster and Drink Safe Personal Test Strips, must be followed as to allow for optimum performance.